Many anglers travel to Alaska’s remote Egegik River to fish silver salmon with us at Becharof Lodge. But after catching so many silver salmon in a day, or two, they often ask about other fishing opportunities in this part of remote Alaska.

Due to our remote fishing location at Becharof Lodge, we can offer very affordable fly out fishing adventures to several isolated streams within 30 minutes of our lodge on the Egegik River. Brown bear viewing is also very popular among anglers who fish with us.

While folks enjoy flying out to fish for more silver salmon, they also are thrilled with targeting rainbow trout, Arctic char, and Arctic grayling. Once a new angler lays eyes on a mature Arctic grayling, and cradles it for a calm release back into a crystal clear stream, they’re hooked for life on pursuing these majestic fish, often all in an effort to catch that elusive, world-class 20” monster grayling! 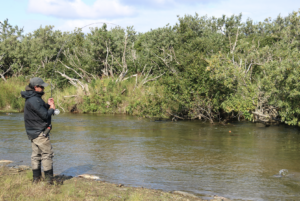 More and more anglers are seeking out Arctic grayling in Alaska, and some clients at Becharof Lodge are returning year after year to specifically target these breathtaking fish. As with all angling, the more we know about the fish we pursue, the better the chance we have of catching them. With that, here’s a brief look at one of Alaska’s most majestic fish, the Arctic grayling.

Without question, one of the most enthralling fish in all of Alaska is the Arctic grayling. The large dorsal fin of the Arctic grayling captures the eye of novice and seasoned line-whippers alike, and is what this fish is most noted for. Many specimen’s carry black spots along their gray, sleek sides, while some fish may be lacking spots altogether. Why the lack or abundance of spotting, remains a mystery. 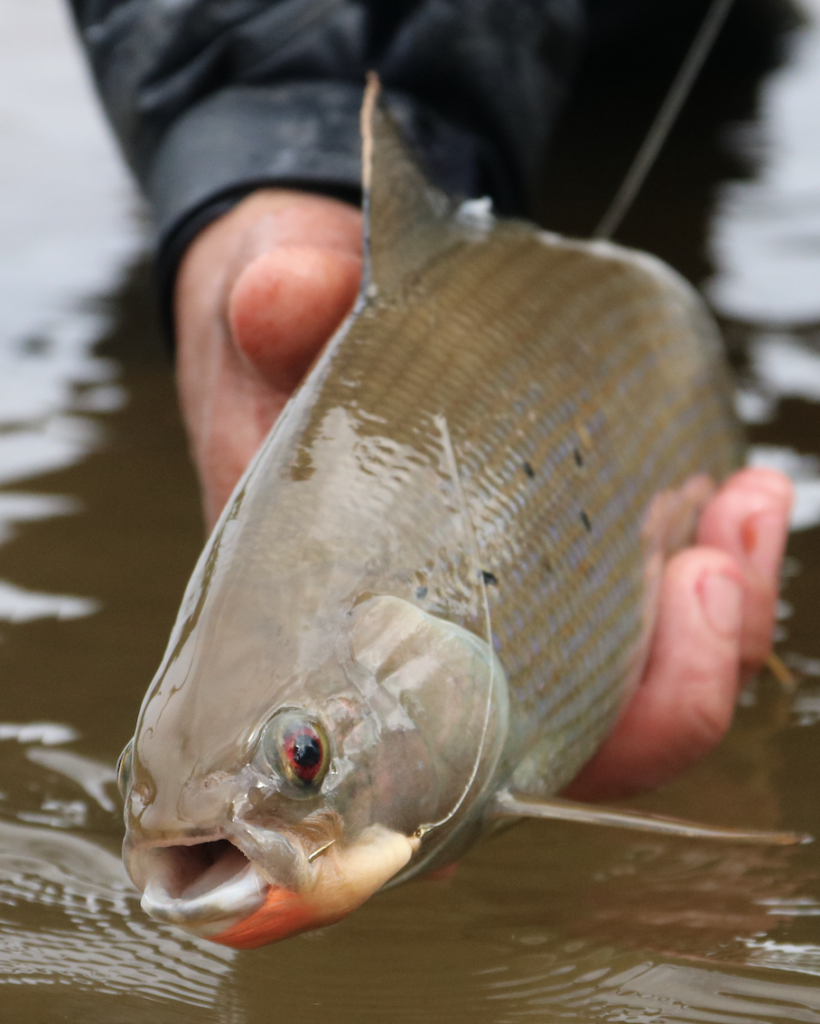 Arctic grayling are renowned for their voracious appetites, which explains the high level of success enjoyed by fly anglers and bead fishermen. With a diet consisting largely of insects in all stages of development, Arctic grayling will feed on most invertebrate species that become available. Woolly Worms, bead head Woolly Buggers, a variety of caddis patterns and the Parachute Adams should be in the vest of all flyfishers targeting grayling. When the salmon spawn commences, Polar Shrimp and Glo-Bugs, along with other egg patterns and a variety of beads, can be the ticket to success. Having a selection of both dry and wet flies is smart, for even though Arctic grayling are aggressive feeders, they can switch off and on the feed for no apparent reason, and having alternate presentations handy can make the difference between an okay day and a spectacular one.

Larger grayling typically hold in deeper waters and pools of streams and rivers. When nymphing, pinching a split shot or two on the leader will get you through small and mid-size grayling, down to where the big ones lay. Arctic grayling are not aggressive feeders in the sense they will pursue their quarry with a vengeance. Instead, grayling hold in narrow lanes and await food to come their way. This is why flyfishers often have increased success over lure-tossers, for the grayling won’t chase spinners to the extent, say of a trout. Grayling can also be finicky eaters, preferring a natural, headfirst presentation of a fly. 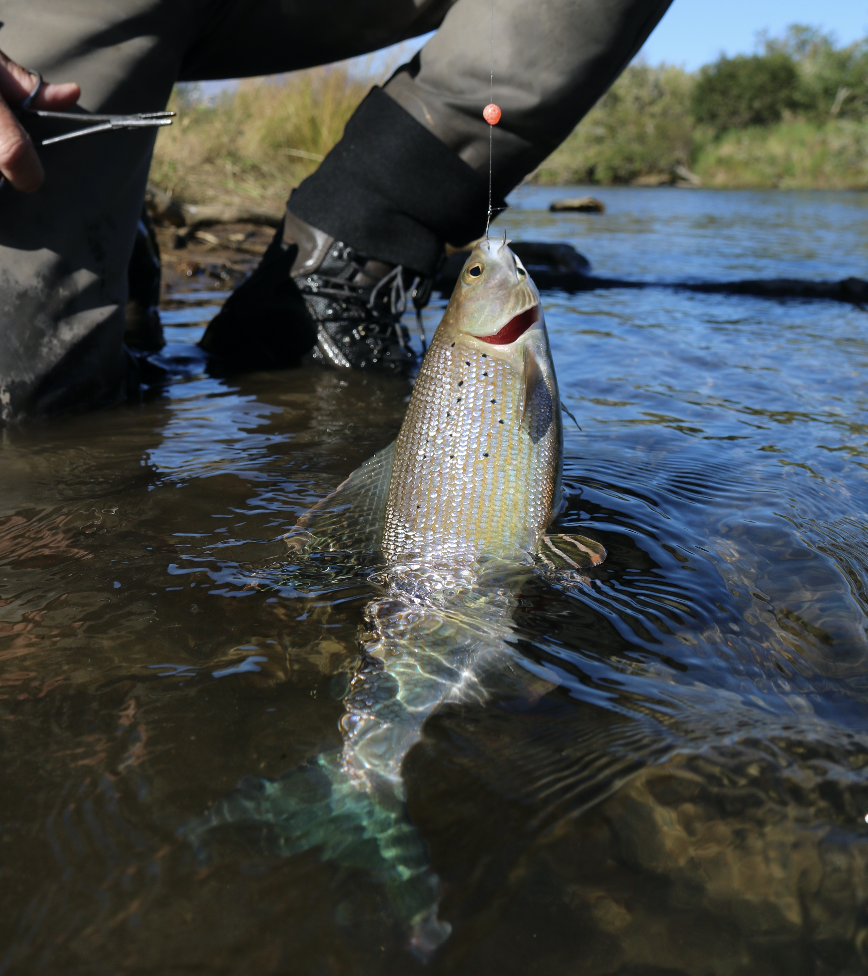 Alaska’s largest Arctic grayling come from Bristol Bay’s river system, the Lake Clark region and Ugashik Lake. In fact, Alaska’s state record Arctic grayling of 23 inches, 4 pounds, 13 ounces, came from the Ugashik Narrows (not far from Becharof Lodge), which is considered to be the premier place for trophy grayling.

Arctic grayling are slow growers, with a five year old fish measuring 12 inches under ideal conditions. One that’s 19 inches will likely be 10 years old, and it’s the old ones that are the key to spawning success. At the age of four or five, grayling spawn for the first time. Arctic grayling don’t create a redd as do other salmonids, rather the female lays 4,000 to 5,000 eggs on loose gravel, where a sticky membrane affixes them. There, the male completes the external fertilization process and the fry  begin hatching three weeks later.

Grayling may travel many miles during the course of the year, or remain in one restricted locale their entire life. After spring breakup–soon after the eggs have been deposited–adult grayling residing in river systems begin migrating to post-spawn, summer feeding grounds. They may travel 100 miles or more to reach these insect-rich waters. By mid-summer, Arctic grayling become somewhat segregated based on age, with the older fish congregating in the upper stretches of rivers, sub-adults in midsections and younger fish in the lower end.

Because Arctic grayling can tolerate such low oxygen content, they survive in waters where other salmonids would perish. Their gluttonous feeding styles of summer and fall must sustain them through winter, when they hold beneath ice-covered streams, rivers and lakes. Not only do grayling need a enough body fat to get them through the winter, they must have enough energy stored to commence spawning, immediately following breakup. Such taxing elements explain why shrews, voles, lemmings and even salmon smolt have been found in the gut of grayling.

While over 70% of the trophy grayling registered with the Alaska Department of Fish and Game came from Ugashik Lake and river systems of Bristol Bay, the road systems also yield outstanding fishing. Matching the hatch can be critical on these piggish fish, so be prepared to meet their needs. 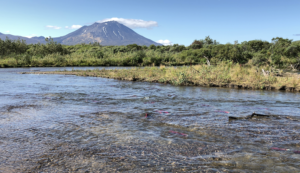 Arctic grayling occupy some of Alaska’s clearest, most pristine waters. When you do lift a grayling from the water for the first time, smell the fish; it often exudes a smell of thyme, from whence its Latin name, Thymallus arcticus, comes from.