While anglers from around the world fish silver salmon with us at Becharof Lodge, once they tie into a hard-fighting, hefty chum salmon, their level of interest increases. “What do I have on, a big king salmon?” Is the typical reaction we hear once they hook into a chum salmon. When battling big chum salmon in the 20-pound class on the Egegik River, these tenacious fish may indeed make it feel like you’re fighting an Alaskan king salmon.

What most folks love about chum salmon is the fight. Somewhere between the athletic demeanor of a coho and the sheer power of a king salmon, fits the chum salmon. Their tenacity to live, once hooked, makes them a great target species, but one that gets little respect from hard-core king and coho fans. 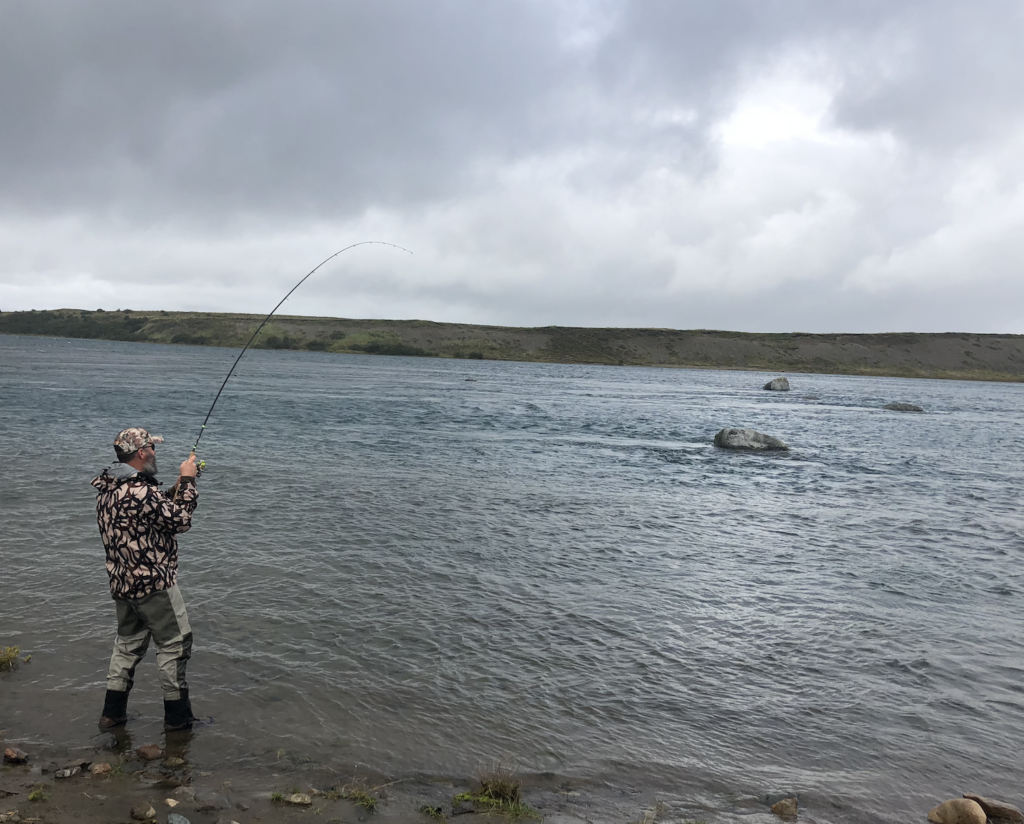 Given their run timing, chum salmon in Alaska offer a bonus for many anglers looking for a change of pace when targeting other fish species. Chum, or dog salmon, are the most widely distributed of the Pacific salmon, ranging from the Sacramento River in the south, over to Japan, up to Siberia and across the Arctic Ocean into Canada’s Mackenzie River. In Alaska’s Arctic, interior and northwestern zones, chum salmon are an important food source for subsistence peoples. Their popularity as a sport fish continues to grow in Alaska, as more and more people are intentionally seeking chum, or dog salmon.

By late July and early August, the chum salmon spawn can be well underway, depending on geographic locale. Chums prefer spawning in small side-channels and near upwelling springs, where the ideal conditions maximize egg survival. They are also known to spawn in intertidal zones. Some, however, will travel over 2,000 miles to spawn. On the Egegik River, we catch a lot of in late July, through mid-August, then they start coloring up for the spawn.

In a redd, or nest, female chums will deposit as many as 4,000 eggs. Upon hatching, chum salmon fry don’t hang in rivers as king salmon, silvers and sockeyes do, rather they form schools in saltwater, moving into the Bering Sea and Gulf of Alaska by fall. Chum salmon will remain at sea for up to six years, though the fish in Southeast Alaska typically move into rivers after four years. Age and size greatly vary among the state’s wide distribution of chum salmon, with an average weight being seven to 15 pounds. The state record is a stunning 32 pounds. We’ve caught several chum salmon on the Egegik that have weighed over 20 pounds, with 26 pounds being our largest. 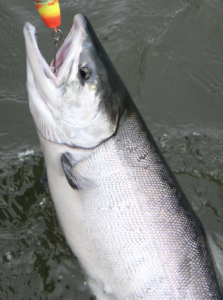 Like all Pacific salmon, adult chums undergo an impressive metamorphosis as the spawning period nears. Their silvery bodies darken, with reddish, purple and green vertically broken ribbons painting their sides. The hooked kype, or snout, of the buck chum salmon becomes very pronounced, as do the enlarged teeth, thus earning it the slang name of dog salmon. These changes happen fast once they’ve entered fresh water.

Because chum salmon begin deteriorating upon entering rivers, it’s to the angler’s advantage to hit these fish as early in their migration as possible if looking to capitalize on their table fare. Upon entering rivers, chum salmon are great to eat, especially smoked due to their high oil content. If traveling to a specific part of Alaska, do your homework and track the run timings of chums in that area if taking some home to eat is a priority. 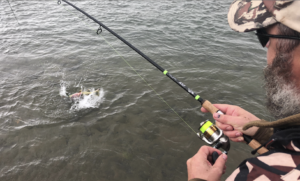 If planning a trip to the Egegik River, count on catching a few chum salmon; if you target them in holding water, you can catch even more chums by casting jigs or lures. Many anglers over the years have left Becharof Lodge catching silver salmon, sockeye salmon, pink salmon and chum salmon, all on the Egegik River.