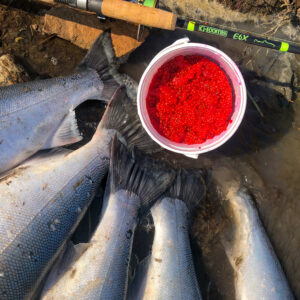 Last coho season, outdoor writer, Scott Haugen, spent the whole time with us, something he’s wanted to do for many years, as he ranks the silver salmon fishing on Alaska’s Egegik River as the best he’s experienced in the state, and this marks his 31st year of fishing the Last Frontier. Scott also wanted to be in charge of our egg curing program, which we were glad to hand-over the duties of.

As some of you may know, Scott wrote the first, and best-selling book of all time, on curing salmon and steelhead eggs, back in 2002. He’s also likely written more magazine articles on curing eggs than anyone. Many of our guests were eager to learn Scott’s preferred way to cure salmon eggs. At the end of each day, folks would gather around the egg curing station at Becharof Lodge, with good reason.

Here’s what Scott Haugen had to offer when it comes to optimizing salmon and steelhead egg cures. 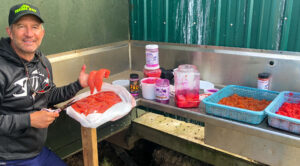 “I’ve been curing salmon and steelhead eggs for over 50 years, and my goal is always to optimize the color and texture of the end product. For five weeks last summer I cured several pounds of coho eggs a day at Becharof Lodge on the Egegik River. Fresh cured salmon eggs are the primary bait used by clients to catch silver salmon on the Egegik River, which speaks to the number of fish in this world-class system.”

Scott’s egg curing process starts by quickly killing each fish that’s caught and immediately snapping a couple gill rakes. His goal is to get the blood pumping or quickly flowing before it coagulates which can compromise not only the meat, but the eggs.

“Once the skeins are free, cut an inch or so off the narrow end, making sure to remove all coagulated blood,” Haugen continues. “One bad bait can ruin an entire batch, and having blood-free eggs to start with is very important. Next, force all the blood out of the vessels in each skein. With a paper towel, blot any remaining blood from the skein.” 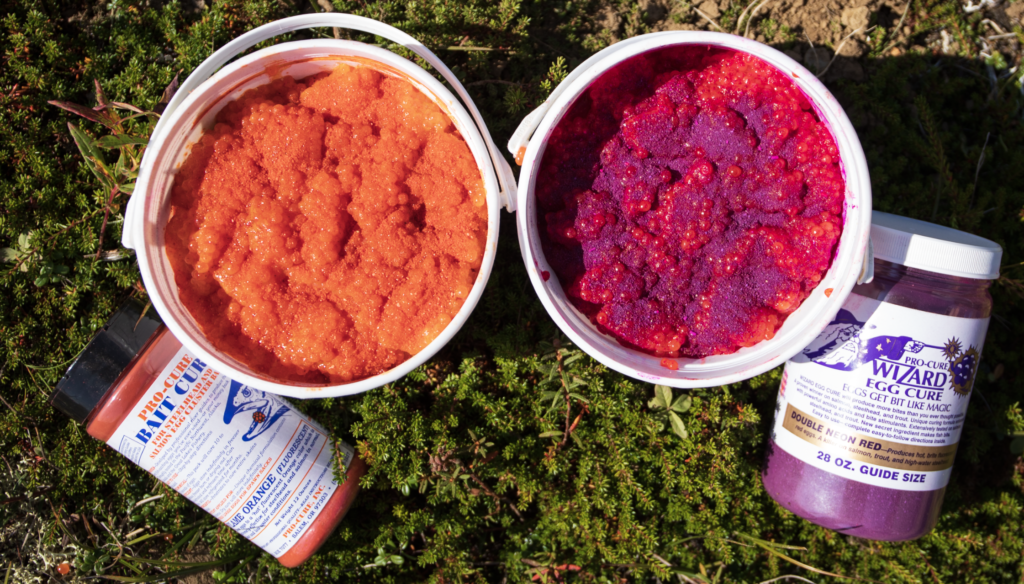 Next, he sprinkled a thin layer of egg cure into the bottom of a plastic curing container, just enough to cover it. Last season he used Pro-Cure’s Wizard Egg Cure in Double Neon Red and their Flame Orange Bait Cure. Clients could choose their eggs, and these were the ones they repeatedly went to day after day, and both produced high numbers of fish all season long. We’ll be using these same egg cures again this season.

Haugen then grips a skein at the large end, holding over the curing jar and cuts 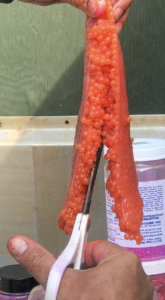 it into bait sized pieces. If the skein is small, simply start cutting at the narrow end as this optimizes single egg retention due to maximized skein being intact. The more membrane that’s intact, the more firm the bait will cure up and the better it will fish.

“Once you reach the point on the skein where the baits become too big, cut up through the center of the skein that’s hanging down over the container; start at the bottom and continue to the top,” Haugen offers. “This gives you two strips of skeins to now cut into bait sizes. When the layer of cure is covered with fresh cut baits, add more cure. Sprinkle just enough cure to cover the baits, as too much can result in chemical burns, or hard, discolored baits. Continue cutting and layering baits and cure until the jar is full or you’re out of eggs.”

Cutting your baits into the size you’ll be fishing does two things. First, it maximizes the surface area of each bait being cured, whereby optimizing their color. Second, it saves time when on the river. Instead of having to cut bait-size chunks, clean the knife or scissors, attache the eggs, then wash your hands and work area every time you need a fresh bait, all you have to do is grab a pre-cut bait and get back to fishing. They’re already air-dried to ideal firmness, so there’s minimal mess.

With the curing jar full, place in a cool, shaded place, like the corner of a shop or refrigerator. Rotate the jar every six to eight hours. There’s no need to shake the jar as you want the cure to slowly precipitate through all layers of eggs. If you have a big container of eggs curing, you can gently roll them around on the final rotation to ensure all surfaces of the baits are covered in cure. 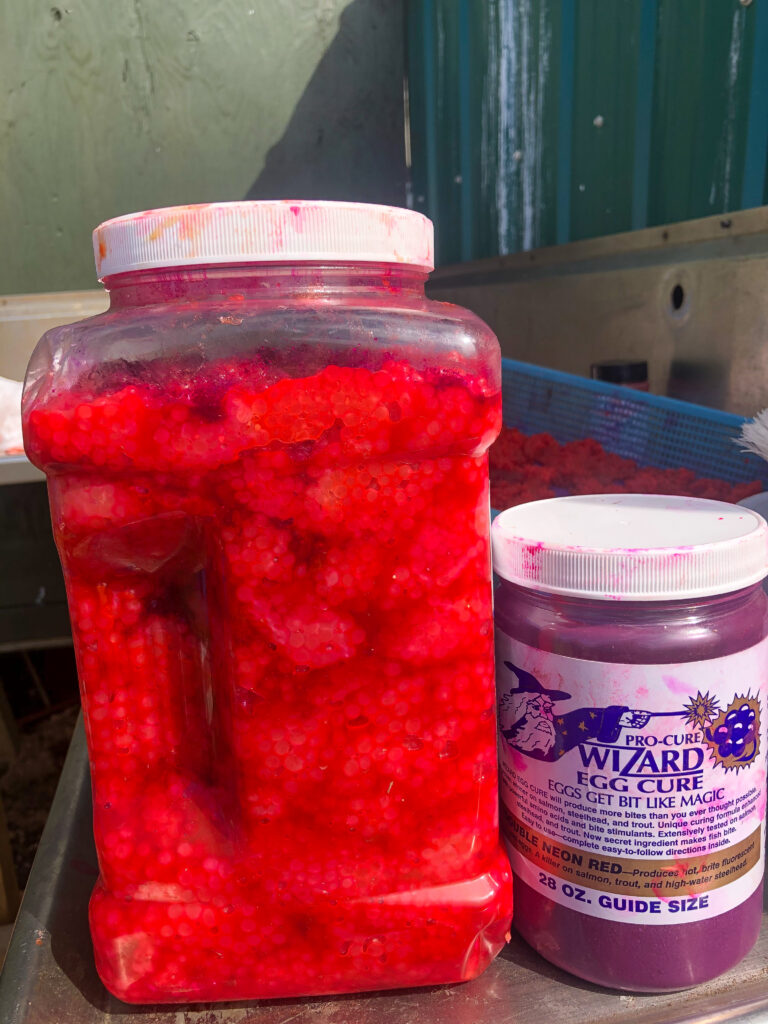 After 36 to 48 hours remove the eggs, drain, and let air dry. Haugen likes putting them on plastic racks or a piece of plywood, not metal which can taint the smell. Never in the curing process should eggs be exposed to sunlight as this will darken them and weaken cell membranes.

“Once dried to the point where baits are tacky to the touch, they’re ready to fish,” concludes Haugen. “Keep finished eggs refrigerated for up to a month, or freeze for longer term storage. The key to any well-cured egg is starting with a blood free skein. Remember, a salmon’s sense of smell is measured in parts-per-billion, so no precautions are an overkill when it comes to achieving the perfectly cured egg.”