When fishing with Becharof Lodge on the Egegik River, you’ll catch a lot of silver salmon. Since you’re only allowed to keep 5 silver salmon a day, that means the rest of your salmon catch must be released.

Due to the nature of the shallow, easy to navigate Egegik River that we catch right out in front of Becharof Lodge, we don’t use nets to land our coho. Instead, we guide them into a shallow place on the shoreline, then release them. This is much less stressing on the salmon, for they’re not fighting and thrashing in the net, and they’re not losing scales along with their valued protective layering of slime.

Fresh from the ocean, coho salmon are much more fragile than they will be after spending a couple months in the river. For this reason, it’s imperative for anglers to quickly land and release their silver salmon. If a salmon is tired, proper revival is necessary, otherwise the fish will die. 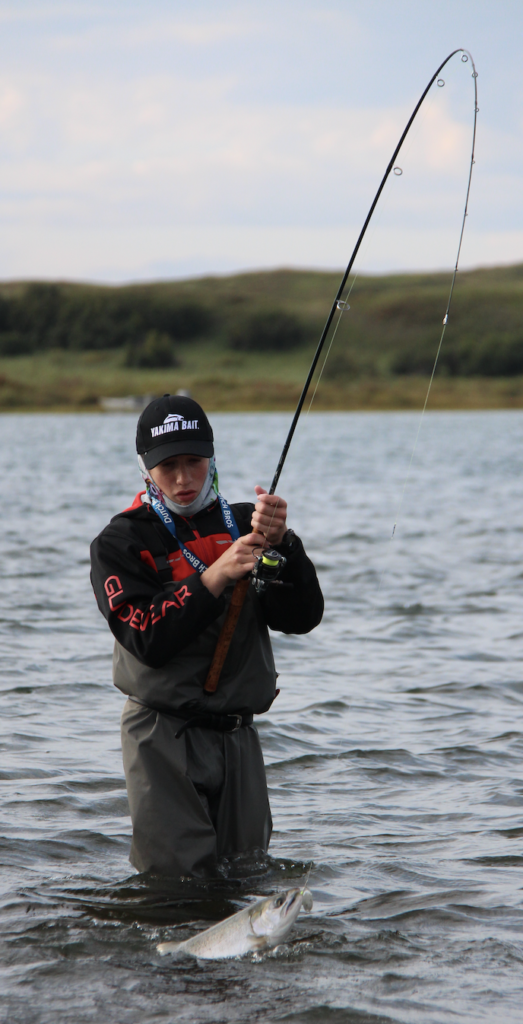 Properly releasing a silver salmon is easy to do, but is an often overlooked element of the sport, even in Alaska’s rivers that are teaming with multiple salmon species. The ideal release of a fish begins the moment you set the hook. When fishing most Alaskan rivers, including the Egegik River, 15- to 17-lb. mainline is ideal for coho salmon. The heavier line allows you to apply more pressure on a fish, landing it before it reaches the point of fatigue. If your line is too light, it will take longer to get the salmon to shore, meaning it will be more tired and have a lesser chance of survival. The quicker a fish can be landed, the better its chance of reaching the spawning grounds. Single hooks, and barbless hooks, also a aid in a quick release.

Once you’ve tired out a fish, get it coming toward shore with its nose and most of its head out of the water. Keep up the momentum, so the fish can’t go into the water and make another run. It’s best to stand about knee-deep in the river, and as you swing the silver salmon past you, toward show, follow it. Keep the rod tip lifted high in order to keep the salmon’s head up, and as it gets to the shallows, grab its tail with your other hand. Now you can push the salmon further into the shallow, set down your rod, grab your pliers and remove the hook from the fish. Avoid running up the bank, dragging the fish along rocks and dirt, as this greatly minimizes its chance for survival.

Prior to releasing your silver salmon back into the crystal clear Egegik River, pumping it back and forth while holding it by the base of the tail is often necessary to bring it back to a healthy state. If a salmon is lethargic, that is lacks tail movement, power and gill action, it needs to be pumped back and forth by the tail prior to the release. To properly revive a silver salmon, or any fish you’ll catch and want to release, grab the fish by the base of the tail with one hand and support its belly with the other hand. Now begin moving, or pumping, the fish back and forth in the water. Make sure you’re in about a foot of water, and that silt isn’t being stirred up and pumped into the gills of the fish.

Guard against vigorous, rapid movement when pumping a salmon. Use a slow, steady rhythm in order to properly revive your fish. This action forces water over the gills, providing needed oxygen to the fish. Make certain the fish is in an upright position at all times, for their swim bladder, circulatory and nervous systems do not function to full capacity when on their side or back. 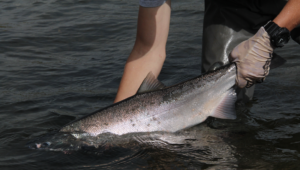 Pumping a fish to full recovery may take a few minutes. Don’t be in a rush.  Preserving the health and survival of that fish is the priority, not catching another one as soon as possible. When fishing with us at Becharof Lodge, catching coho salmon is the least of your worries.

If snapping pictures of the fish you want to release, do so close to the water surface. Avoid hoisting the catch fully out of the water to remove the hooks. Hooks can be removed with the fish in the water, preferably with its head facing upstream.

When reviving a fish in fast water, ensure its head is pointing upstream at all times. Water running backwards over its gills depletes the quantity of oxygen that can be utilized. At the same time, avoid dragging a fish backwards through the water. Any time you move a fish in water, lead with the head by pushing from the base of the tail. This will maximize the amount of oxygen that the fish can process.

If, for some reason you do have to lift a fish from the water that is targeted for release, never do so by inserting a finger beneath the gill plate. Not only does this increase the likelihood of ripping a gill, it removes valued, protective slime, making them more susceptible to the attack of bacteria. 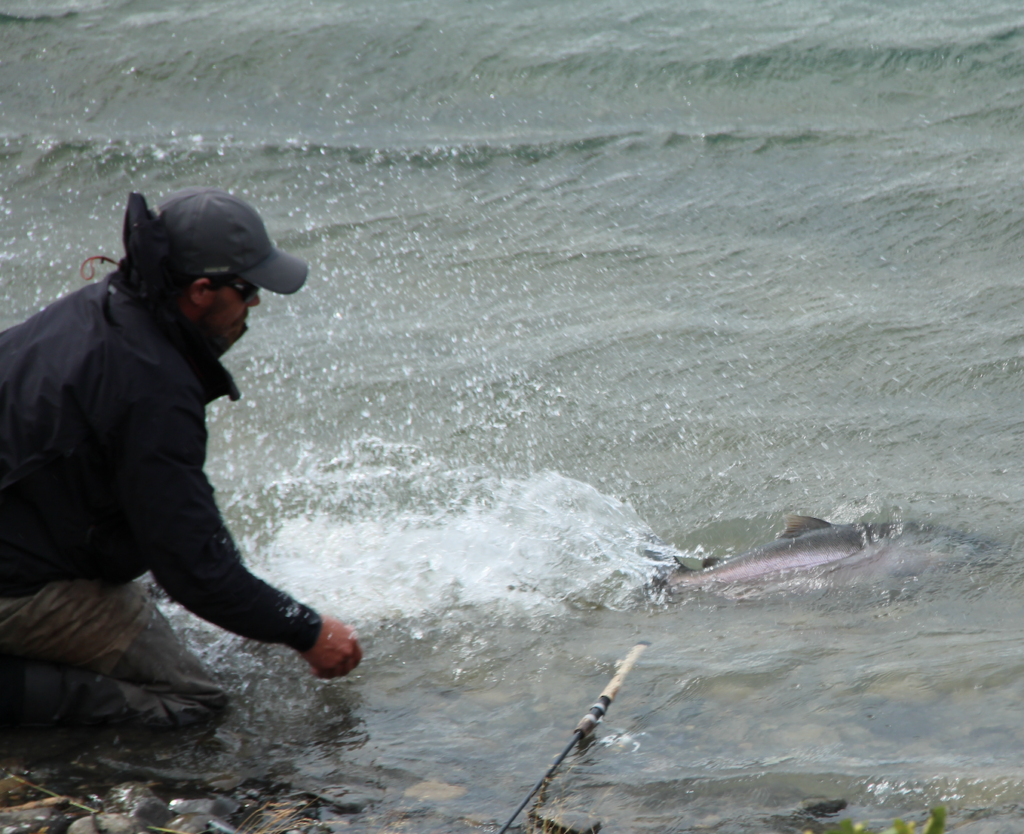 The golden rule when releasing a fish: Never let a fish go until it’s capable of swimming away under its own power. Never force or toss a fish back into the river. If released prematurely, the fish may go to the bottom, turn on its back and expire. If this happens, it’s too late to save the fish.

By taking the time to properly revive and release a salmon, you’re ensuring future runs will provide fun fishing action for generations to come. At Becharof Lodge, we strive to do the best we can when it comes to properly releasing salmon.